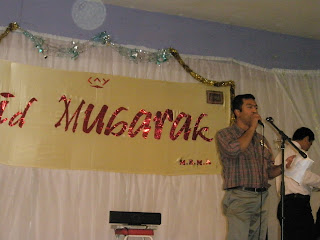 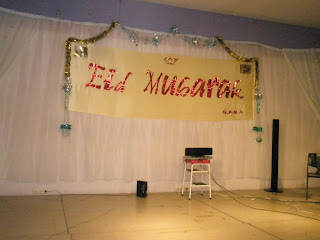 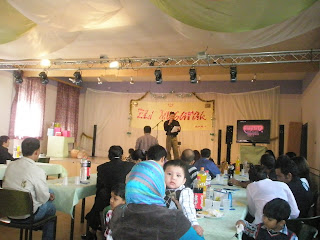 အီးဒ္ဒြလ္ဖြသြာရ္မိတ္ဆုံစားပြဲက်င္းပရျခင္းရည္ရြယ္ခ်က္မွာ..တစ္ႏွစ္တာလုံးကြဲကြာေနေသာရပ္ေ၀း၊ရပ္နီးမွျမန္မာမြတ္စလင္(မ္)မ်ားအားလုံး၊မိသားစု၀င္မ်ားအားလုံး၊ညီအကိုေမာင္ႏွမမ်ားအားလုံးတို႔အား၊ခ်စ္ခင္ရင္းႏွီးေစျပီးျပန္လည္ဆုံဆည္းေပ်ာ္ရႊင္ေစရန္ရည္ရြယ္လ်က္က်င္းပရျခင္းျဖစ္ပါသည္။
ရပ္ေ၀းရပ္နီးမွေရာက္ရွိလာေသာမြတ္စလင္မ်ားအားလုံး၊အမ်ဳိးသား၊အမ်ဳိးသမီးမ်ားအားလုံးခ်စ္ခင္ရင္းႏွီးစြာ.(မိုလာကသ္)ျပဳလုပ္ခဲ႔ၾကပါသည္။အီးဒ္ဖြသြာရ္မိတ္ဆုံစားပြဲအခန္းအနားကိုည(၈း၃၀)နာရီတြင္ေအာင္ျမင္စြာက်င္းပျပီးစီးခဲ႔ပါသည္။
Posted by mbma at Sunday, September 27, 2009 No comments: 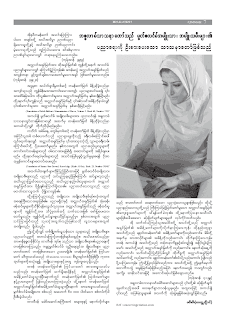 Gazi
Posted by mbma at Thursday, September 17, 2009 No comments:

The Qur'an was revealed on Laylatul-Qadr

Allah tells us that He revealed the Magnificent Qur'an on a blessed night, Laylatul-Qadr (the Night of Decree), as He says elsewhere:

(The month of Ramadan in which was revealed the Qur'an) (2:185). We have already quoted the relevant Hadiths in (the Tafsir of) Surat Al-Baqarah, and there is no need to repeat them here.

(Verily, We are ever warning.) means, telling them what is good for them and what is harmful for them, according to Shari`ah, so that the proof of Allah may be established against His servants.

(Therein (that night) is decreed every matter, Hakim.) means, on Laylatul-Qadr, the decrees are transferred from Al-Lawh Al-Mahfuz to the (angelic) scribes who write down the decrees of the (coming) year including life span, provision, and what will happen until the end of the year. This was narrated from Ibn `Umar, Mujahid, Abu Malik, Ad-Dahhak and others among the Salaf.

(Hakim) means decided or confirmed, which cannot be changed or altered. Allah says:

(As a command from Us.) meaning, everything that happens and is decreed by Allah and the revelation that He sends down -- it all happens by His command, by His leave and with His knowledge.

(Verily, We are ever sending,) means, to mankind, sending Messenger who will recite to them the clear signs of Allah. The need for this was urgent.

(if you (but) have a faith with certainty.) Then Allah says:

(La ilaha illa Huwa. He gives life and causes death -- your Lord and the Lord of your forefathers.) This is like the Ayah:

(Say: "O mankind! Verily, I am sent to you all as the Messenger of Allah -- to Whom belongs the dominion of the heavens and the earth. La ilaha illa Huwa. He gives life and causes death...) (7:158)
Posted by mbma at Saturday, September 12, 2009 No comments: